Home › Bedtime Stories › Once Upon A Time: Pope Francis, a football fan in Vatican . A bedtime story

Once Upon A Time: Pope Francis, a football fan in Vatican . A bedtime story 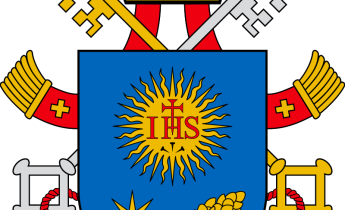 Hello Moms and Dads! Here’s a bedtime story for your youngsters…happy end guaranteed !

Once upon a time, a baby boy was born in Argentina,  just a few days before Christmas (Dec. 17,1936) He was the firstborn  of Mario  Bergoglio and Regina Sivori; the newborn was baptized a week later, on Christmas day and named Jorge(George) Mario.

His family home wasn’t any luxury villa for they were migrants from Genoa(Italy) and had humble roots. Nevertheless, the little boy was raised with love and care.

His paternal grandmother soon became an important person in his young years, for she was quite a character! Rosa Margarita Vassallo was  of peasant stock, a humble person,  but also  compassionate, smart,  very devout and politically involved.

She was sent to Turin to get a good education ; she learnt French, discovered the pleasure of reading and most of all the importance of working hard, a quality inherited by her grandson, for he too worked hard and did well at school.

After their marriage Jorge’s paternal grandparents decided to migrate in south America and sail on the Principessa Mafalda  but they had to change their tickets and did not leave until a year later; divine intervention, who knows… Pricipessa Mafalda went down off Brazil, taking more than 300 passengers to their deaths.

After spending two years in Panama, they made their way to Buenos Aires, where they were poorer than poor; they were out in the street, with nothing ; Mario who was an accountant had to sell goods out of a basket to survive. They put a roof over their heads when Jorge’s grandfather borrowed 2000 pesos and bought a warehouse.

Life got better after the birth of the little boy; Mario started working on the railway, while  Regina became a fulltime housewife devoting her life to her five children. They weren’t as poor as other migrants; they ‘re living in a real house in Flores, an ordinary suburb of Buenos Aires and not in some squatter settlement or slum as did lots of their countrymen.

The future Pope’s family had food yes, but new clothes were a luxury that  they couldn’t afford  as  holidaying or owning a car. Regina and Mario could not accept any food waste and ensured that Jorge ate everything on his plate! Fortunately that wasn’t hard to do for his mama was a very  good cook and  the young boy learnt  very early to cook lots of Italian dishes.

Jorge was very attached to his mother and shared more than cooking recipes with her; one of his best moments was to sit with her and listen opera on the radio”the most lovely thing” as he fondly recalled, years later.

But Opera and Lyrics weren’t his only musical preferences; as many of South-Americans he loved to danse the  tango; that was also the place where he met Amalia, aged 12 and asked her to marry him…did he or didn’t he? Amalia said that she was punished when her father found the future’s Pope proposing  letter.

The young Jorge loved reading and literature, but also chemistry, a subject in which he earned a Master’s degree. But books and studies weren’t the only passions of the young Argentine…

Everyone knows the passion of Argentine’s for football and the future Pope wasn’t an exception! He sure kept good memories of those days when he went with his father in the Gasometro Stadium! This was known as Club Atletico San Lorenzo de Almagro and was founded by padre Lorenzo Bartolome Massa in 1908, thus allowing young people to play on church ground instead off in the streets. Needless to say that the young one was in that number, at least until his bad lug obliged him to stay on the terasses.

Jorge’s hero was Rene Pantomi(1920-1983) who played  for San Lorenzo in 1946 when they won the national title.  The San Lorenzo team had “Papa Francisco” badges  on their jerseys  during a game  when San Lorenzo scored at 1-0 win. The future Pope never denied his love of the beautiful game; even now he’s still a card carrying member of his childhood club and still  a fervent supporter of the beautiful game :  “Live your sport, as a gift from god, an opportunity not only to improve your talents, but also a responsability…I have confidence in all the good you can do, especially among young people.” He said, years later…

The young boy from Argentina is now Pope Francis, the Catholic Church leader, but you won’t be suprised that one of the first to visit him at the Vatican, was Leo Messi and his family… and as promised, Happy-End guaranteed !