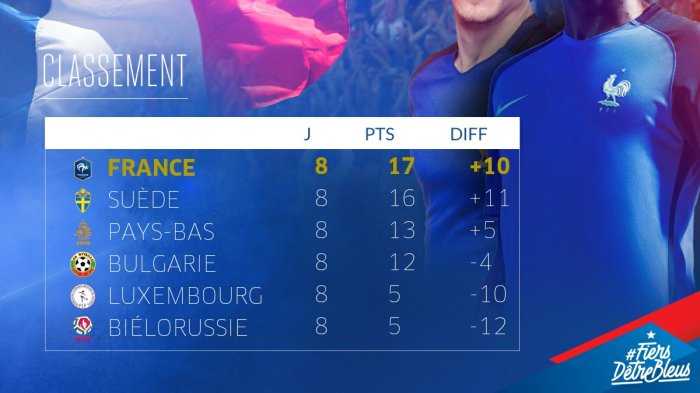 In French the word DRAW is translated  MATCH NUL but NUL means also useless, hopeless, worthless even trashy; for once the dictionary gave the exact sentiment of the french public who had the good/bad idea to go watch France v Luxembourg in the Ville Rose(Pink Town) of Toulouse.

The last time when France failed to beat Luxembourg in 1914, Franz Ferdinand was still alive and Charles de Gaulle a young gallant officer! Even so, only three days after a convincing win versus  an average Oranje team, the draw against the 136th nation in the world, silenced the  French crowd as the  “Red Lions” valiant defense put an end in their chanting and hopes for another three points, so crucial before the last two games.

France are still ahead but only one point from  the second(Sweden) thus obliging  Didier Deschamps’ men to face two must win games, Belarus at home and most important Bulgaria, away. France are rated 10th and Luxembourg 136th; 0-0 …how come ?

During the whole game each french shot was met by a head, a foot, a player’s backside and the goalposts! Despite their efforts in front of their opponents’ goal and frustration from the heroics of the Luxembourg’s goalkeeper Jonathan Joubert(Neuer in disguise?) the French  avoided the worst,  when Gerson Rodrigues’ shot was saved from Hugo Lloris’ goalpost ! 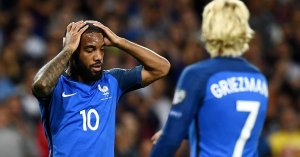 Were Les Bleus  bewitched by some unknown voodoo? How come that 34 shots to Luxembourg’s three  and after hitting the woodwork twice they had to be content with an unsatisfying draw ? How come that a star-studded French team including Kylian Mbappé, Thomas Lemar, Paul Pogba, Kingsley Coman, Antoine Griezmann, N’Kolo Kanté, Olivier Giroud, weren’t able to score just only once ?

Nevertheless the Red Lions’ defensive block could be broken if Les Bleus were faster and more decisive on the counter-attacks; too slow, lack of precision in the transmissions and  their counters were far from being launched  quickly !

It was certainly hard to break up Luxembourg’s parked bus, but France lacked realism and maybe some of the key players took that game too lightly( I’m looking at you Pogba!) That french naivety cost the team in some crucial phases of possession as they didn’t  size the rare opportunity to counter attack using the team’s speedy players.

The best player on the pitch  was Chelsea’s N’Kolo Kanté; impressive once again , confirmed for the second time(after his excellent performance v Holland) his worth; will he put Mathuidi on the bench? It seems so.

What’s the problem with Griezman right foot? The Atletico’s player is quite conscious that there’s work to be done; even if he was quite comfortable in tonight’s game, he was less inspired than against the Oranjes.

It’s time for Raphael Varane to come back ! The Merengue  defender  is still out(injured) and Kursawa is not on  the same level! Worst French player for both games…. 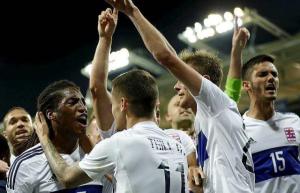 The best Luxembourg player was without doubt the team’s goalkeeper; always on the ball, some good saves but well,  several french shots were directly on him or not well taken…

What about the future? France will face Bulgaria (Oct 7th) Away and Belarus at the Stade de France(Oct. 10th) while Sweden will face Luxembourg at home and Holland away.

Didier Deschamps and France’s captain Hugo Lloris are on the same wavelength:” We’re still first and we must keep it that way; it’s not about being optimist or pessimist, we must be realist”.