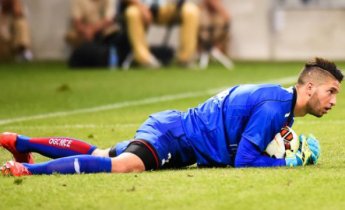 Hear, Hear, there’s a newcomer in Ligue’s 1  Player’s list; a 19 year-old  Frejus(South France) native, OGC Nice’s number one goalkeeper, Mouez Hassen, rumored to be  the next French world-class goalkeeper just like his predecessor between the sticks, Hugo Lloris.

There are lots of similarities between the current and the former “Aiglon”: both Nice’s Youth Academy students, both first A team choice goalees at nineteen, both  excellent in France’s national teams(U-16 U-17 U-18 U-19)  and proud Winners of the Cambardella Cup, the Holy Graal for each young French player. There’s one difference, though; Mouez’s start as a goalkeeper, was a late one. He was thirteen when he put on the gloves for the first time.

“He’s very talented, declared Thierry Malaspina, goalkeeper’s coach at OGC Nice’s Training Centre.” This kid, came from the amateur world ; I met him when he was only 8 years old. One day, during the team’s training, I asked him to go into the cage and since then, he continues to impress me. He has incredible reflexes, he’s quick out of  his line, and got great reflexes too. His greatest quality ? I’d say the absence of stress; he feels it, but that doesn’t show, he’s a cool customer.” 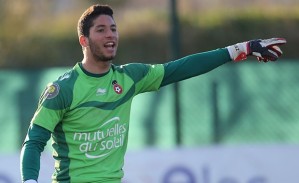 Like Lloris, Hassen is quite slender,(1.84m / 70 Kilos) but that doesn’t bother him, for his slender frame allows him to keep his speed, one of his major qualities. He’s also very vocal and bosses well his defenders.

He’s certainly not the most famous or the best goalstopper of Ligue 1 but since he officiates between the sticks, parrying Joris  Delle’s injury, Nice’s doing all right; 11 points taken from 15 possible, and their  last game Away at Lille 0-0 is a good omen  for the young player.

The young man, watches often former Aiglons’ Lloris (Tottenham Hotspur GK) and  D’Ospina ( Arsenal GK) videos, to learn some tricks of their trade; he even watched the North London’s Derby and was very much impressed by their talent and game quality. 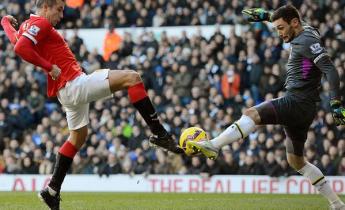 “Both of them are great players, he said. It makes you work more to reach their level and even try to do a bit better than them, why not ?”

Hassen, is a nineteen year old professional player, but his life is like any other teenager’s; playstation, wi-fi, mates, but first of all, Football ! He’s a hard working lad and that’s why he’s called to join France’s Under-21. Also,  having  started 21 times in Ligue 1 made him the youngest goalkeeper in the five more important European Championships.

Will he be better than the former duo of world-class goalies ? Don’t Forget This Name !

Here’s some of his highlights, have a look.

Like Loading...
‹ Nasri hits out at Deschamps and Lloris: Methinks, the Lady protests TOO MUCH !
PSG vs Chelsea (1-1) Players ratings and Highlights, Part 1: PSG ›